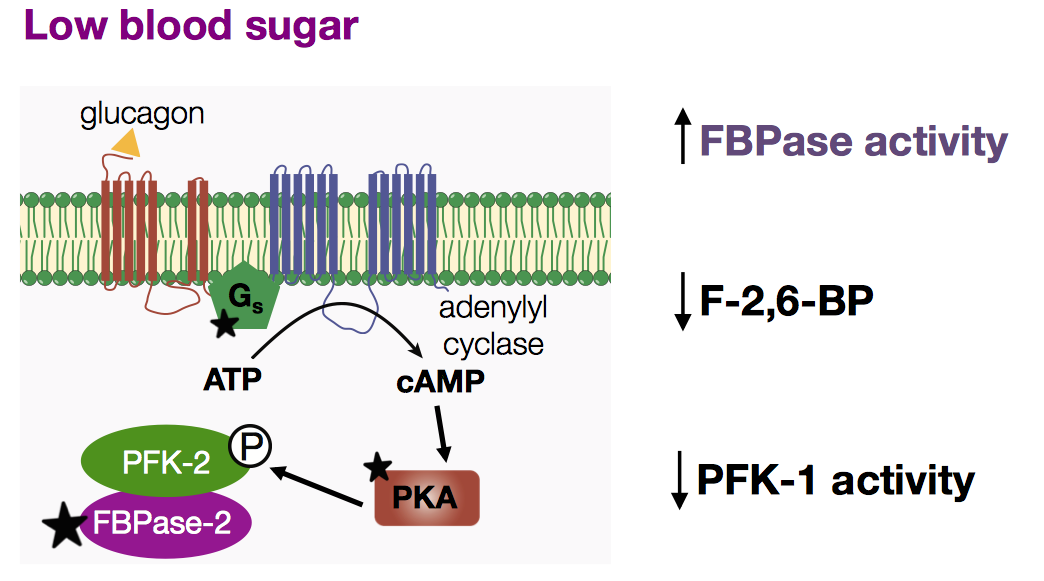 4. Regulation of Glycolysis in the Liver

PFK-1 is inhibited by ATP. The logic being that when there’s an abundance of energy in the cell, there’s no need for glycolysis.

PFK-1 is activated by AMP. A high AMP means that ATP production is down and so glycolysis needs to proceed. What about ADP?

So part of ADP is converted back to ATP. This makes AMP a better indicator of a cell’s low energy state.

Citrate from the CAC is another measure of a cell’s energy. It can be routed to lipid synthesis or it can circle back to inhibit PFK-1. Since Citrate is a good measure of cell’s energy state, a high [Citrate] signals glycolysis to slow down. It does this by inhibiting PFK-1. This enhances the inhibitory effect of ATP.

In the Liver, [ATP] is always high. So it’s inhibitory function on PFK-1 is limited. Instead, a related enzyme more important here. Welcome, Phosphofructokinase-2 or PFK-2 for short.

F6P is converted to Fructose 2,6-bisphosphate (F26P) via PFK-2. It has two domains, a phosphatase domain and a kinase domain. Where else did we see this?

Plotting the velocity curve of [F6P] for the liver there’s a S-curve, indicative of the high levels of ATP there (i.e., PFK-1 is inhibited). If the levels of PFK-2 rise, that curve will switch to a hyperbolic curve, indicating that PFK-2 is an allosteric activator of this reaction. Or put another way, F26P increase the affinity PFK-1 has for its substate F6P.

F26P itself is regulated by external factors.

PFK-2 is operating in its kinase domain in this case.

This is called Feed-Forward Stimulation.

Got it? No, then re-read it. It’s important.

Conversely, when [Glu] is low, we need to put a brake on Glycolysis. In this case, PFK-2 flips over into its phosphatase domain.

The switch between domains is under hormonal control.

Low blood glucose triggers the secretion of Glucagon by the pancreas. Glucagon binds to glucagon receptors at the surface of liver cells. The resulting bond changes the conformation of those receptors, which triggers the activation of a small G protein. This activates an enzyme called Adealyl Cyclase. Adealyl Cyclase catalyzes the conversion of an ATP into cAMP. The [cAMP] then rises. cAMP interacts with Protein Kinase A or PKA (recall the role PKA played in Lipid Lypolysis).

Therefore, PFK-2 will catalyze the conversion of F26P back into F6P.

Thus, Glucose consumption will slow down in the liver, allowing other organs like the brain will have access to the Glucose it needs. When the [Glu] rises and Glucagon signals stops, PFK-2 will switch back to its Kinase domain, [F26P] will rise, and PFK-1 activity will resume.