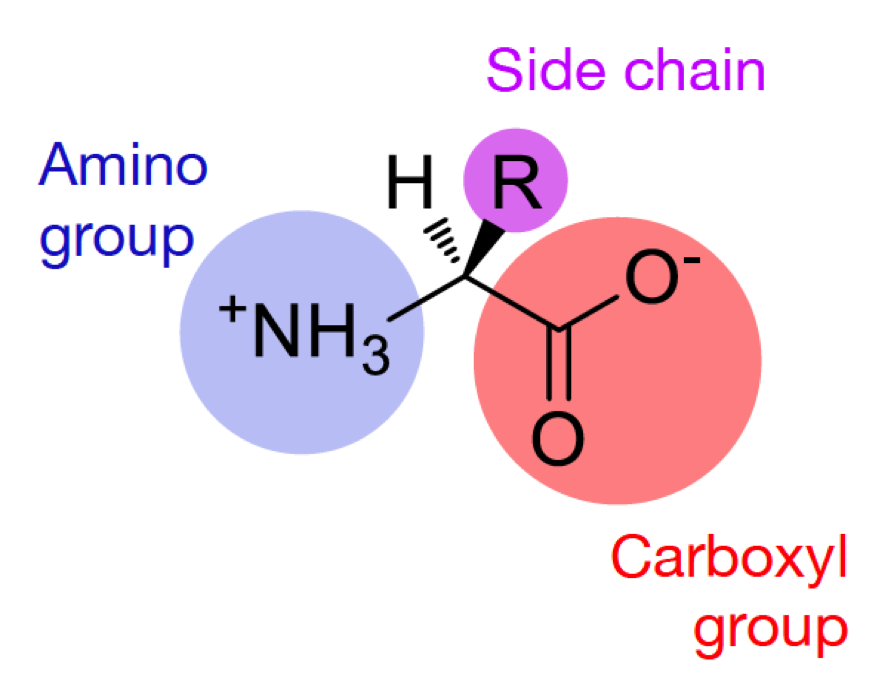 A protein is a linear polymer, or polypeptide, of amino acids, each linked by a peptide bond. Proteins are responsible for the many of the essential functions of life.

There are 20 common natural amino acids, which are the “letters” that make up each of the proteins in nature. For example, …THVLPFEKINEGFDLLR…

Each amino acid has four different groups coming off its central carbon, the α-Carbon: an amino group, a carboxyl group, and a side chain R (variable). At the physiological pH of ~7.4, the amino group and carboxyl groups are ionized (AG+, CG–), making the amino acid neutral and thus zwitterionic: a molecule with both positively/negatively charged components.

An amino acid is also chiral because it has four different groups off the α-carbon. Chiral molecules are considered optically active—that is, they rotate plane-polarized light.

Recall the chirality of carvone from the intro lecture, that the enantiomers S-(+) and R-(–) Carvone have different tastes: one is spicy (caraway), the other sweet (spearmint).

Classifying the 20 amino acids can be done many different ways. For example…

Polarity is an important attribute because it affects the types of non-covalent interactions that can be formed. Relevant to proteins are the following three:

Two examples that show the different functionalities of AA side chains:

When H is in its apolar conformation, it has two configurations around the imidazole group.

The ability to be both polar and apolar makes it relatively easy to move protons on and off the side chain, which means it can live inside the hydrophobic protein core or on the surface surrounded by solvent. It’s also ideal for active sites.

Here are pKa‘s for a few other amino acids:

Dr. Gaudet’s Food for Thought: why would Tyrosine be so much more acidic than Serine, even though they’re both alcohols?

The thinking: Tyrosine has a resonance cyclic structure and it’s aromatic, which makes for an extremely stable molecule. Its conjugate base (which forms a phenol group) is therefore highly stable, much more so that the corresponding conjugate base on Serine. The more stable the base, the stronger the acid, thus Tyrosine wins the acid war here. More on this here. And here especially.

Now, most amino acid side chains are formed of carbon, nitrogen, oxygen, and hydrogen, but two also contain sulfur: Methionine, a hydrophobic residue, and cysteine.

Cysteine is quite reactive under physiological conditions and can easily be oxidized to form sulfide bonds. These conditions are usually found on the extracellular side.

Back to chirality; note that all amino acids are chiral except two:

Amino acid classifications can be shown in a Venn diagram.

Interesting example of crossover is Lysine. It is charged at 7.4 because its R contains a positive charge. It’s polar because it can form hydrogen bonds. Yet, it can also be non-polar since the rest of the R is aliphatic, or non-polar. So in some situations, it will behave as hydrophobic.

Here’s a tremendous resource on the lore of Amino Acids: http://www.biochem.umd.edu/biochem/kahn/teach_res/amino_acids/