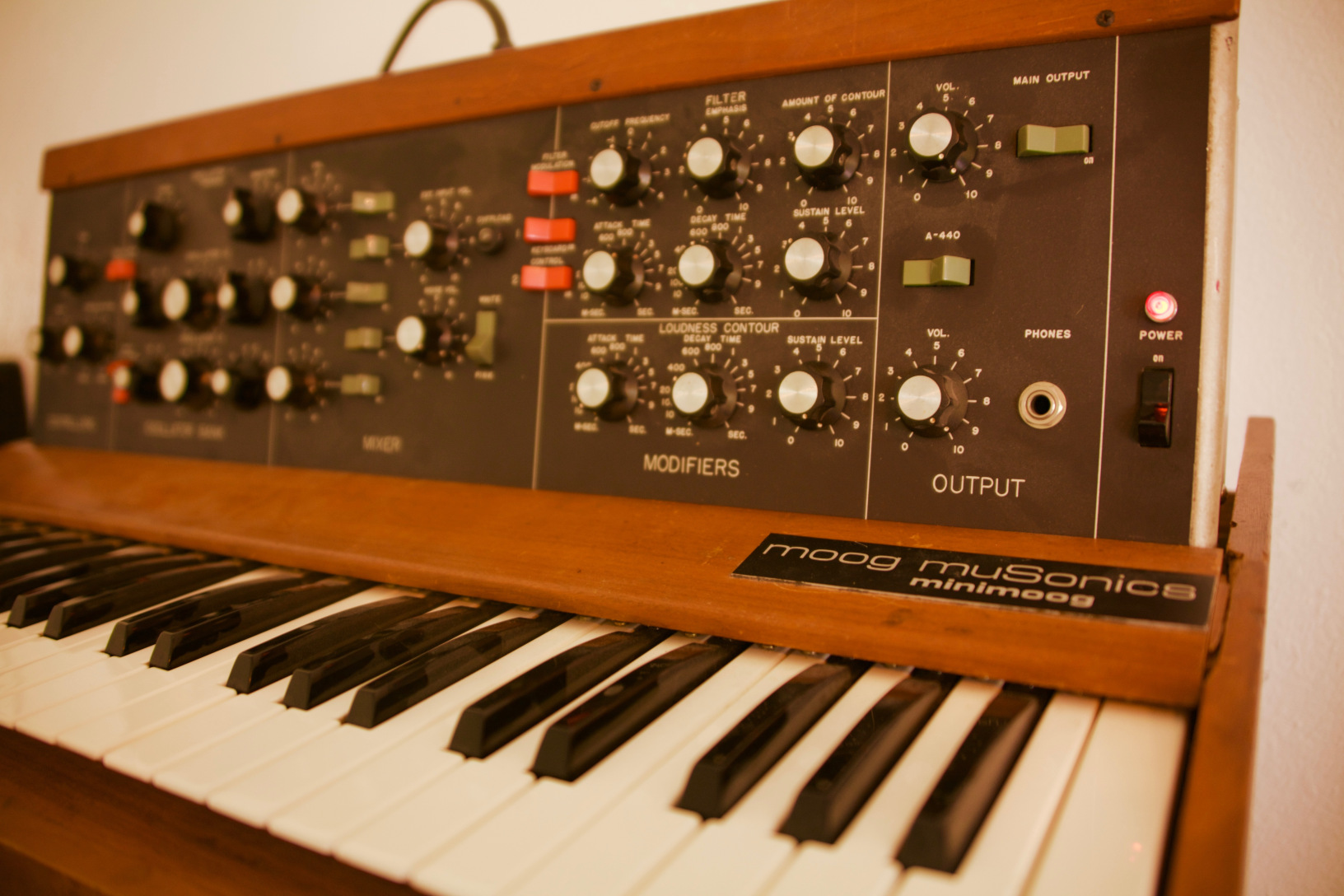 Trivia time. Do you remember that cloying synthesizer figure on Rush’s “Tom Sawyer”? How about the thumping bass on “Thriller” or the hook on “Funky Town”? Any of this ring a bell? If so then congratulations, you know the MiniMoog. But what is it, exactly?

In 1970, synthesizer pioneer Bob Moog decided he needed an affordable alternative to the modular behemoths that had defined his brand. Behold one such behemoth:

With the MiniMoog, he would jettison the modular’s complex system of cable-connected parts in favor of a sleek case with a fixed set of components. Owing to his patented filter and oscillator design, the tone and sonic power of this new, smaller synth proved no less formidable than the monsters he replaced. Moog’s Mini soon became one of the most popular synthesizers of its time.

Click here to see the original product brochure that once hung in my teenage bedroom.

Sadly, Moog Music ended production of the MiniMoog in 1981. But like all things once famous and now rare, those that still exist today are high-dollar collector’s items.

I’ve had a love-hate relationship with mine since acquiring it for $50 in 1989. That’s right, fifty bucks. There was this strange period in the late ’80s when all the gems of the analog age were being tossed aside for digital consumer electronics, which later proved to be vastly inferior. I was guilty of this too. A few years after buying my Mini, I let my Prophet-5 and OB-Xa go for a couple hundred dollars each, keyboards that today would easily fetch thousands. A recent eBay search, meanwhile, suggests that my $50 Minimoog is now worth 100x what I paid for it.

The hate portion of this love-hate relationship concerns reliability and maintenance. Considering that this machine was built in 1972, it’s a miracle that it even turns on. It has its share of challenges though. Oscillators and noise generators that randomly stop working, horrible tuning issues. Keys that stick. You name it.

All of this was made much worse ten years ago when during a party, a drunk friend knocked it off its stand and didn’t tell me. I found my smashed Mini on the ground the next morning (he later called to confess; we’re still good friends). It’s never been the same, of course, even after shipping it off to get fixed. A couple years ago, I simply gave up on the thing, stuffed it in a bag and forgot about it.

Yesterday I unearthed it. After dusting it off, warming it up, and saying a prayer to the many analog gods, I pressed down on its keyboard and heard a long-forgotten sound. Fat, gritty, Moog oscillators rocking in and out of phase. A bass nothing short of thunderous. It was wonderful. My $50 mini not only still worked, but every problem I had been having with it mysteriously vaporized. Perhaps it just needed a vacation.

Finally, I’d be remiss not to mention the big news this week that Moog has decided to resurrect this wonderful synth.

The Moog reissue was discontinued a few years ago, but then Behringer released a $300 rack-mount clone called the Model D. By all accounts it’s amazing.

How Moog Brought Usability To Synthesizers